From Monday 4th to Wednesday 6th June, North Edinburgh RPCS hosted three nights of outreach services. With the help of this year’s RP Mission Team, 7500 invitations were distributed in the community surrounding the school in which we meet. However, while we are always prayerful that God will bring in those none of us know (and He often has done), the emphasis – as in previous years – was on members of the congregation inviting our own friends, neighbours, family members and those we have been involved with in local community activities throughout the year. In our weekly prayer times in the run-up to the services we shared and prayed for specific people we planned to invite. 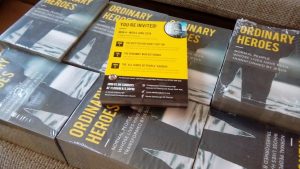 The congregation’s pastor, Rev. Peter Loughridge, preached on the theme of ‘Ordinary Heroes: Normal People Whose Lives Have Been Transformed by Jesus’. We see countless examples of this in our Bibles, but the focus was more specifically on the early church period (Acts and Paul’s Epistles) and some of these men and women in our Bibles who are less well known:

We are hugely encouraged and thankful to God that over the course of the three nights He brought in 18 different people who are not Christians or do not normally come to our church. This doesn’t count those from other churches who also came to support us by their presence with us. Some of the 18 came on more than one night. Also encouragingly, 5 of them were teenagers who we have got to know through the involvement of some from our church in a weekly lunchtime drop-in (held in the local high school) and also a weekly youth club run by local Christians.

Thank you for your prayers for and interest in this work. Please continue to pray for fruit in the lives of those who have heard the gospel.