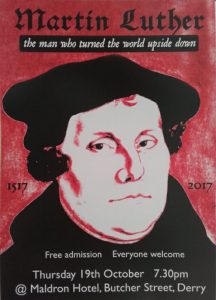 On Thursday evening, October 19th, Rev Raymond Blair from the Limavady congregation (Northern Ireland) gave an excellently balanced and thorough talk on the life of Martin Luther entitled: ‘The man who turned the world upside down’, or rather as Raymond pointed out, turned the world the right way up!

The meeting was held in the Maldron hotel in the city of Derry and was marvellously attended, with easily 60 people attending (with seats initially set out for only 30!). There was support from right across the Western Presbytery, but even more encouraging was the large number from the community who came. All the literature on the book stall was distributed, and the whole evening was a challenge to the small faith that we have in an immense God!