During the autumn of 2015, the Hazleton, Pennsylvania, USA congregation was blessed to welcome visitors, then receive into membership 3 large families who live roughly an hour to our south, in the greater Harrisburg region.  A year later, Hazleton Session starting investigating the possibility of planting a daughter congregation in Harrisburg (which is Pennsylvania’s state capital) with these families as the core (as well as the several other RPs also in H’burg).

In March this year a Psalm sing was hosted in Harrisburg and 38 attended. Finding a suitable location caused some delay, but the first official evening service was held in July, with 55 in attendance. The most recent meeting was last Sunday, 20th August.  This time the Lord provided an ‘ideal’ location with easy access to major roads, very large meeting areas, including a kitchen, and which was very affordable.  Unfortunately, a communication breakdown and last-minute scheduling when the building was finally secured, reduced attendance to 43.  However, we hope for a nice rebound in September, even expecting to see some new faces from local colleges. 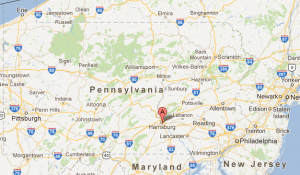 The current plan, under the oversight of Hazleton Session, is to continue monthly evening services until such time as a core group stabilizes and we can move to more frequent (weekly?) meetings.  Our next meeting is scheduled for Sept.17 at the Progress Church of God,  3424 Old Orchard Drive Harrisburg, PA 17109.  We will be meeting in the basement, which is accessible from the rear parking lot.

Just days prior to the first evening service, we were informed of a Spanish-speaking congregation in the Harrisburg Area, who were interested in our work.  The pastor and his family attended our first meeting.  We had 2 men, plus that pastor’s wife, in attendance to translate, and they expressed a general desire to be more Reformed.  They returned again the second month!  This time, they were quite emphatic of their desire to be part of a Presbytery, and increase their learning of what it means to be Reformed and Presbyterian.  While Hazleton Session and Atlantic Presbytery scramble to determine the best course of action, one of Hazleton’s members, our translator Scott Rocca, was invited to teach them how to sing Psalms.  He did this at their church meeting yesterday (27th August) and was very well received!  They have also asked for RP preaching.

This is still a very new development, and prayers are greatly appreciated (for both works!). Might it be the Lord’s plan to simultaneously establish TWO RP congregations in Harrisburg? We appreciate the prayers from the RP global community.   What may be unique in Harrisburg is that in many ways we are trying to SLOW things down!  We have a lot of interest, lots of people involved, and the temptation is to just go full speed ahead.  Yet we need to be careful, both for Harrisburg and Hazleton’s health.