Years ago I went to see a film called Koyaanisqatsi. It was like Ecclesiastes without the resolution of chapters 11 & 12. It consists of slow-motion and time-lapse footage from natural landscapes and from cities, accompanied by a carefully crafted score. It opens with shots of deserts, rivers, waterfalls and progresses through images of power lines, to aircraft and traffic patterns during rush hour, to people sorting mail and manufacturing electrical goods, to circuit board patterns and telecommunications wires, to space travel. Wikipedia says: “The frenetic speed and pace of the cuts and music do not slow as shots of modern leisure are shown. People eat, play, shop and work at the same speed.”

As the pace builds and builds the film ends with a rocket’s flaming booster engine slowly spinning earthwards and the word which had been chanted at points during the film ‘Koyaanisqatsi’ appears on screen with its definition:

ko.yaa.nis.katsi (from the Hopi language), n. 1. crazy life. 2. life in turmoil. 3. life disintegrating. 4. life out of balance. 5. a state of life that calls for another way of living.

I’ve thought of it several times over the last number of months: Life out of balance—that’s what life was before the Coronavirus slowed us all down.

One of the things that I have really enjoyed over the last few months has been the fact that people have time—time to talk, to chat, to catch up.

Even in our own family it has been nice to have everyone round the kitchen table at lunch and at tea—and for meal times not being hurried for me to get out to meetings or the girls to ballet.

Life has been lived at a different pace. And it has been good. More balanced.

I don’t know if you have found that too—but I suspect that many have. (I know for some it has meant working extra hard as you have had to cope with far greater demands. Thank you.)

We have lived life at an increasingly breakneck speed over the last decades. Allegedly labour-saving devices have only allowed us to cram more in. Social media has fuelled the need to be insanely busy—for fear of missing out. Stress and stress-induced depression, and a whole new raft of anxieties have been afflicting us.

We weren’t made to live at breakneck speed. And I think we’ve found that life doesn’t need to be lived at it either. We were designed to work and rest: to work—because we are made in the image of a creative, working God; to rest—because we are only image bearers, and not God. We read that after his work of creation he rested—not because he was tired but to set the pattern for us to follow.

Work or busyness aren’t to be gods to us. Yet somehow they are. No one admits to not having much to do. We all like to impress others with how busy we are. Toxic patterns of being the last to leave the office plague work environments.

How do you know when work has become a god to you? When your identity and happiness come from it. Or when your sorrows and despair are dictated by it.

How do you know when your family has become a god to you? When you feel you have to cram their lives so that you feel a success. Or when their success/failure dictates your happiness or identity.

We weren’t made to live like this. Out of balance.

You know how it is with technology—the best thing you can do is hit reset or restart, and all the clutter and files that have been clogging up the system disappear and the device runs smoothly. Well, we have been given a God-ordained reset. Let’s be careful what clutter we bring back into our lives. And let’s not resume at breakneck speed.

One of the things I have appreciated during lockdown is going for a walk on a Sunday afternoon or evening—and what specifically I’ve appreciated is the quiet, the calm, the restfulness of it all. I’ve appreciated that there is no sport on, no shops open. In fact, our gods of sport and the temples of retail have been taken from us, and people are doing what God, in part, intended them to do. Rest.

And so when we resume normality, one of the things I long to see is the continuation of that restful Sunday—to see people keeping the Sabbath as God intended as a day to rest. And to do more than rest, to turn their eyes from the gods of sport and retail and work and family to the true and living God. Because to know him is to find rest for our souls. That’s where life finds its balance. 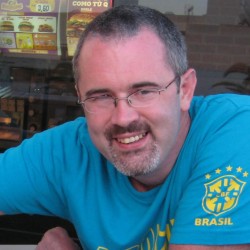 Mark pastors 2 churches in the Republic of Ireland. He is married with three daughters. Before entering the ministry he studied architecture. He enjoys open water swimming, design, and watching rugby.