The Reformed Presbyterian Church of Walton was organized by the New York Presbytery (now in the Atlantic Presbytery, RPCNA) on September 5, 1861, with 19 members, including two elders and two deacons.  In 1863, a building for worship was erected five miles outside Walton on East Brook road. The first pastor, David McAllister, arrived the same year and constructed a parsonage across the street which remains to this day as the Henderson farmstead. In 1874, the original building was disassembled, moved into the village by horses, and rebuilt where it now stands on East & Bruce Streets. The original foundations can still be spotted from the dirt floor of the church basement. 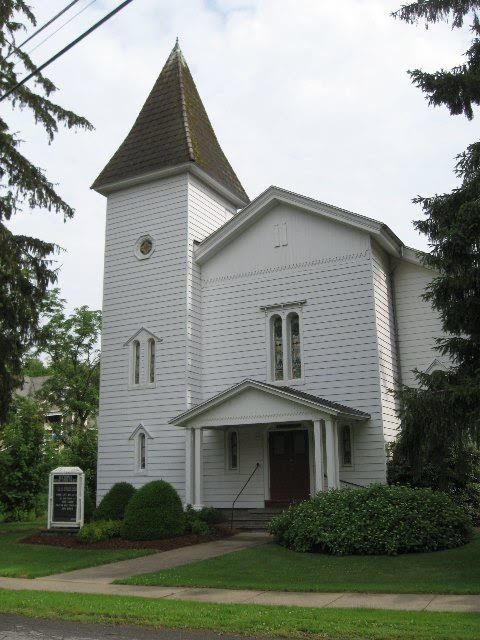 Many additions have enhanced the building over the years, including a back fellowship hall with Sunday school rooms above, an adjoining kitchen with study upstairs, and a back entrance and parking lot that make the space handicap accessible. Beautiful stained glass windows with recognizable Bible symbols replaced the clear glass windows in the sanctuary in the 1910s. These pictures have served as topics for at least one sermon series in recent memory. Other changes include the installation of Wifi in the building, and while you will no longer find four wood stoves and long black stovepipes in each corner of the sanctuary, or kerosene lamps in the windows, but one will find the light and warmth of God’s Word set forth week by week.

The current parsonage on Townsend Street was purchased in 1928 at the time that Rev. and Mrs. Frank Lathom arrived. Rev. Lathom had the longest pastorate of any man to serve in Walton, from 1928-1952. His work profoundly impacted both the congregation and its community. In 1929, he started Released Time religious education in the public schools, which continued until 2017. He even took it on the road to country schools in Rock Rift, Trout Creek, and the Oxbow! He also served as Director of Delaware County Bible Association, placing Bibles in homes that did not have one, Chaplain of the Delaware County Historical Association, and County Superintendent of Churches for 125 churches and 80 pastors over fourteen years. The Bovina congregation united with Walton in 1943, and a young Rev. Dr. Wayne Spear was part of that group.

Major floods in 1996 and 2006 devastated dairy farms – the bedrock of the area economy – and other local business. Economic blight puts a strain on schools and other public services. The national heroin epidemic has swept through, claiming lives and filling the county correctional facilities. Delaware County has had the highest rate of suicide in New York State. In short, there are great challenges to the community, including its churches.

Walton RPC currently has 31 communicant members and 4 baptized members. We average 25 people at morning worship weekly, and also hold evening worship weekly with both adult and children’s Sabbath school, prayer meetings twice monthly, a Women’s Missionary Fellowship monthly, and various other study groups and social events throughout the year. As the congregation ages, a primary ministry has become caring for one another amidst failing health. We pray that young families will join us in serving Jesus Christ, and that this historic witness to our Lord will remain in the Catskills of Upstate New York.