The Gateway Christian Fellowship are a small congregation which meet within the walls at the centre of Derry (Northern Ireland). The Gateway Go team ran between Monday 13th -Saturday 18th August 2018 and was made up of 8 young people; Hannah Fallows, Rebekah Moore, James Neilly,  Matthew Magee, Stephen Fallows, John Neilly, Ben Kennedy and Grace Kennedy.

Some members of the team helped run a children’s club which took place on Tuesday, Wednesday and Thursday mornings, whilst the other distributed leaflets. Although the number of children attending the club was disappointing this number seemed to increase as the week went on. We were encouraged as the children listened well to the teaching through the week and engaged and enjoyed various activities including memory verse, games, quizzes and craft. 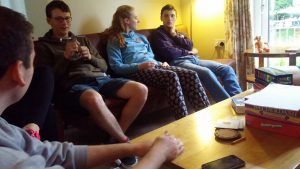 Throughout the week the team took part in some door to door work in the afternoon and distributed leaflets for the meeting on the Friday “Choosing Life or Death” along with a leaflet about important questions about Christianity. We were blessed that so many people took time to talk to us and answered the questionnaires that we used. Through the week we had many good conversations with people at their door steps.

On Thursday afternoon the team did some open air work within the centre of Derry. We sang various psalms, Rev Stephen Neilly gave a short address and Anne Neilly gave her testimony. Some people listened and we were able to speak to some people after. 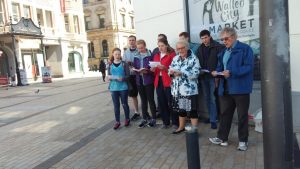 On Thursday evening the team met and enjoyed dinner with the Gateway congregation, after which the team shared their reflections of the week. On Friday evening the meeting “Choosing Life or Death” took place, at which Judith Tait and Rev Mark Loughridge spoke on the topic of Abortion. We were encouraged to see some people from Derry at the meeting.

Each day we met together to study the Bible with different team members discussing scripture that was particularly applicable or spoke to them. We also studied the books “A Fresh Start” by John Chapman and “Nothing In My Hand I Bring”. The team bonded well and enjoyed fellowship and friendship together. 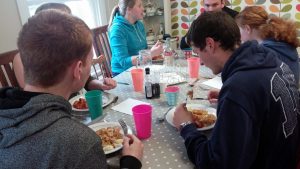 I was greatly encouraged by taking part in this go team and working alongside other Christians seeing their determination and willingness to share the good news of Christ. I was also encouraged by the warmth and love of the Gateway congregation as they seek to spread the gospel through the city of Derry.