If you destroy this idol, you will die!” shouted Abuk’s husband and the traditional priest as Abuk tore apart the idol made of sticks and mud. Her young son had just died, and she was very angry that the idol to which her family had sacrificed and prayed had not preserved his life.

Abuk, however, did not die. The traditional priest then told her that unless she sacrificed a cow to the idol, she would have no more children. Abuk refused. She began attending a church in a neighboring village where she heard and believed the gospel, and she had three more children.

Another of Abuk’s sons became very ill. Her husband wanted Abuk to take him to a witch doctor and told her that he would kill her if this son died. Abuk took him instead to the church for prayer, and he recovered.

Then a church began in Abuk’s village through the ministry of Cush4Christ. Abuk started attending and became a member. She has helped teach women in the church how to read, and she faithfully attends a Bible study for church women. Abuk is seeking to raise her children in the Lord and regularly testifies to God’s faithfulness amidst the various trials of her life.

I Thess. 1:9b: “…you turned to God from idols to serve the living and true God” 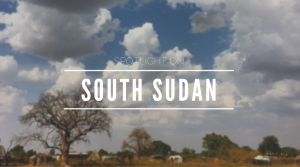 *Photos are not of individuals mentioned, but all names and details in the story are real.