The following review is taken from the Gentle Reformation website. Check it out for more great articles and book reviews!

Vince Ward is a zealous, super-dedicated, on-fire missionary-minded Canadian believer.Yet he wasn’t always that way.Sometimes the Lord sends His people to far-off places. They preach the gospel and practice discipleship and become the human instruments for building His church and advancing His kingdom.In their suffering as pioneer missionaries they bring back strong spiritual lessons for those holding the ropes back at home.Vince Ward has done that with his good new book, Pursuit of Glory, A Disciple’s Journey with Jesus.

Vince and Julie Ward have poured their lives out for what has grown into the Reformed Presbyterian Church in Sudan in the 21st century. Only the full story will be available in some newspaper or web site in heaven. For now Vince has done good journalistic work in offering the first rough draft of the history of Christ’ work in this war-torn nation south of Egypt in Africa.

He starts with his own story of growing up in a Christian home yet not embracing faith in Christ until some years of prodigal lifestyle. The Ottawa RP church welcomed him even though his outward appearance looked off-beat when he first showed up as a new believer.

He writes in short chapters and has the discipline to stick to the main story line and not wander off on tangents. Some parts of the story are especially moving in recording Christ’s grace in his life. “All my life I had been looking for greatness, power and love in all the wrong places,” he writes about his salvation in a summer camp setting. “But after all those years of patiently watching me chase empty dreams and desires, God opened my eyes to see him in the gospel, the good news about Jesus.”

A chapter on total surrender outlines a pilgrim’s progress, as he put off the old life and put on the new. “I asked the Lord to make his desire my own,” he writes, and the Lord led him down the path to service in world missions. Another strength in the story is his detail of the slow walk to the mission field and his commendable willingness to follow the counsel of elders in preparing to go to Sudan. He also does not romanticize the sacrifice and cost in the mission. One chapter title: “The Dark Night of the Soul.” 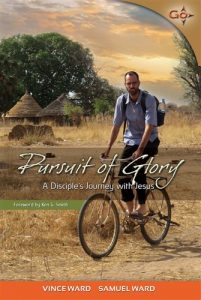 A bonus is the inclusion of a shorter autobiography from Vince and Julie’s oldest son, Samuel. He grew up on this mission field and offers an unusual perspective of an MK, or what is sometimes called a Third Culture Kid, or TCK. MKs and TCKs often don’t have a clear sense of home yet they are often prepared to do great work for the kingdom.

Vince and Samuel have added to some important literature of first person accounts of frontier mission work. The Diary of David Brainerd by Jonathan Edwards is a classic in this field, along with Shadow of the Almighty by Elizabeth Elliot. This readable account of a family’s service supplements this library of first person mission literature.

These stories play an important but quiet and unspectacular part in church history. Future missionaries and their supporters will read them, just as they read Brainerd, Elliot and others, and be moved to keep taking the gospel to the ends of the earth.

This was a guest post is by Russell Pulliam, an Indianapolis Star columnist who directs the Pulliam Fellowship summer intern program for the Indianapolis Star and the Arizona Republic. Though Gentle Reformation has already featured one review and even an interview with the Wards, we believe this review written by a professional highlights the importance of this story and merits this further attention.