“Atlanta Presbyterian Fellowship (APF) ministers in an impoverished, crime-ridden area–a neighborhood close to downtown Atlanta and to many attractions (Mercedes Benz Stadium; Georgia Aquarium, World of Coca-Cola; etc.) that is rapidly gentrifying, yet which still has many challenges, including burned-out buildings and downtrodden lives.

We began in 2010 as a Bible study on the steps of an old, abandoned church building consisting of just four stone walls, and have engaged in weekly worship since December 2012. For 2018 so far, we have had an average of 33 people attends Lord’s Day worship!”  Pastor Frank Smith 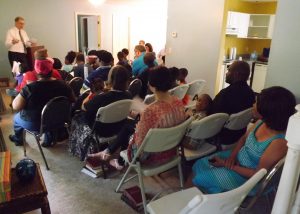 Let’s pray for Pastor Smith and his wife Penny as they labour in this difficult area, and ask that God would continue to build his church in the city of Atlanta!