Our history is a testimony of Christ’s presence and power amid His Church in Kokomo. The pattern of both hardships and blessings occurs in the lives of God’s servants throughout the Scriptures, from Job to Joseph, or even the saints of Sycamore.

Though we began as a Bible study involving three families in the Kokomo area in 1983, the Lord would patiently and intentionally build His Church one stone at a time, until a decade later He organized our congregation. Interest and excitement in church planting were high, but those early years were marked by a series of ups and downs, including a case of adultery. Another discouragement came when the wife of Paul Faris succumbed to cancer shortly after he began preaching for the fledgling group. We experienced both the beginning and halting of a dream, but the Lord used it all to cause us to look to and rely upon Him alone.

A huge blessing was being prepared for us, as a young Masters student at Purdue was guided to the RP Church in West Lafayette, IN. Through the ministry of Dave Long and others, Barry York would eventually be equipped and called to the ministry. Over the next three years Barry interned, graduated from RPTS, and was called as the church planter for Kokomo. We were organized as a congregation on November 18, 1994, the realization of our dream.

In our early days, each Lord’s Day was like setting up and tearing down in a “foreign land” in a building not our own–typical for many church plants. After meeting at the “Y” for well over 6 years, we purchased our current building in December 1998. 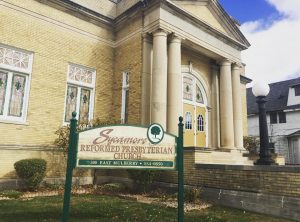 Over the next few years we experienced both progress and challenges, all blessings from the Lord. Evangelistic outreach and mercy ministry in our community led to changed lives and new members. For many, the Word was immediately received with gladness. We rejoiced with heaven over each soul. Unfortunately, for some, their change was temporary, and they fell away, having no root in themselves.

On a humorous note, one former disgruntled member commented to Jason Camery, at another church gathering, about our Psalm singing and worship practices. In 2001, Jason visited our worship service out of curiosity, and ended up surrendering his credentials, pursuing the ministry here, which led eventually to his pastoring the church plant in Marion, IN.

For two decades, Pastor York was the Lord’s gift to our congregation as he preached, taught, and led the saints, alongside elders Camery, Dinkledine, Fisher, Hunt, Marcisz, and McKissick. Barry was a sought-out speaker at various youth events, family conferences, which led to the realization throughout the denomination that Barry’s gifts could be used at our seminary. We gave him up willingly, for the most part, so that future generations of students at RPTS would be trained and prepared for faithful service. 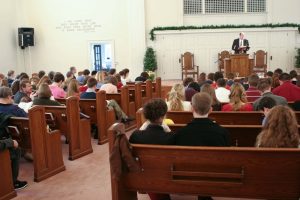 The Lord was still caring for our congregation by providing Shawn Anderson, a recent RPTS graduate, who arrived in the spring of 2013. Many congregations have experienced the uncertainty of months or even years of a pulpit vacancy, but we were blessed with several months of overlap as Pastor Anderson joined us before Pastor York left for RPTS.

We enjoy many aspects of fellowship including shared meals, outdoor activities, and the annual Thanksgiving Psalm Sing between several congregations within our presbytery. We have the benefit of being within about an hour’s drive of 6 RP churches. This benefit is not an accident, as we are a fourth-generation church plant, starting with Bloomington, Indianapolis, Lafayette, and then Kokomo and eventually Marion.

Beyond Sabbath Day activities, our weekly ministries include: a Westminster Confession of Faith class, a women’s Bible study, a Food & Fellowship time—addressing the faith of teens, and a Faith & Life class. Our members represent Sycamore in community ministry through the Rescue Mission, the Pregnancy Resource Center, and other places. Statistically, we are 60 members (38 communicants) with a number of adherents, and average 65 attendees in AM Worship, 34 in the PM.

These are not small or insignificant things in the life of this congregation, but signs of Christ in our midst, working and witnessing through His church, “And they went out and preached everywhere, while the Lord worked with them, and confirmed the word by the signs that followed.”