It is with sadness that we record the death of Rev. John Marcus McCullough, a retired minister in the Reformed Presbyterian Church of Scotland, on the 9th April 2018.  The funeral was held on the 17th April at Glasgow Reformed Presbyterian Church, where Rev. Kenneth Stewart preached on 1 Corinthians 15 and the resurrection to come.  The following biography of Rev. McCullough was put together by Rev. Kenneth Stewart and Rev. David Sutherland.

Rev John Marcus MacCullough was born in Belfast on the 5th March, 1935 – the youngest of three children born to Thompson and Janette McCullough. His father, a house builder, passed away when Marcus was only 5 leaving Janette to raise three young children working when she could and without the support of a welfare state. Marcus won a scholarship to the Royal Belfast Academical Institution but viewed being moved up a year as a disadvantage as he felt he was too young entering and leaving university. He graduated in Classics from Queens University in Belfast in 1955 and then took his Bachelor of Divinity followed by a Diploma in Education in 1958. 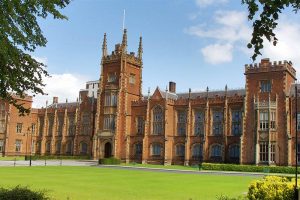 On leaving university at 23, Marcus took up a post as head-teacher of a Christian school in Calabar, Nigeria (a city made famous by Mary Slessor) but returned to the UK 2 years later to begin training for the ministry in the Reformed Presbyterian Theological College in Northern Ireland. He was licensed in 1963 and called the following year to Glasgow RP Church, where he was to minister for 14 years until 1978. The church, then situated in the Gorbals, was in a rather poor state of repair and Marcus’ considerable practical skills were put to good use in its upkeep. Aside from his regular studies in the ministry, he spent much of his time visiting people on his motorbike – having a particular burden for older, lonely men, often addicted to alcohol. He also taught RE in more than one school.

A young lady by the name of May lived next door to his lodgings and their friendship deepened (unsurprisingly, it began and blossomed over books!) and continued to grow as they studied in the Bible Training Institute at the top of Byres Rd. Marcus and May married in 1970 in Glasgow and moved into the manse – where May was immediately challenged by more than one dismantled engine in the kitchen as well as books literally everywhere!  A highlight of this 14 year period was a minister’s exchange when the family relocated to Indianapolis in 1974 for over a year. 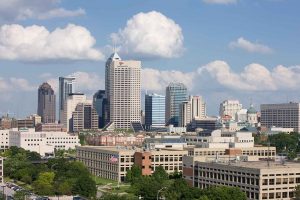 At age 44 Marcus believed God led him back to Belfast, the city of his birth and education, with May, Janet, and Paul, the birth of Sarah to come soon after completed their family.  Marcus taught RE for the next 20 years in two schools in Ballymena and was highly regarded as a teacher.  But this was only a fraction of what he got up to in those decades.  He was heavily involved with Eastern Europe for Christ which included trips to Romania and Hungary which Marcus made in a dilapidated van to deliver aid and Bibles to families in rural communities.  Those trips included some interesting border crossings.  He was involved in establishing a Christian school in Belfast.  He supplied pulpits at Reformed Presbyterian congregations at the weekends.  He was called to a congregation in the states in 1987, but after careful consideration he declined that call.  He was also an active member in Trinity congregation under the ministry of Ted Donnelly.  The Clerk of Session remembers Marcus as observant and thoughtful towards the needs of others and as often having original ideas and proposals for things to be done.

In his retirement from teaching Marcus accepted a call to pastor two congregations in Donegal.  How would a man in his retirement get on in such a rural pastorate?  Jane Long, a member in one of those congregations, describes the five year ministry of Marcus: “We gained much from his ministry.  He was never afraid to get to the point when he needed to, and yet he did have a deep compassion and love for us all.  He never forgot the lost sheep among us.  I sat in the car park when he announced his retirement and cried because I felt no one would care about those sheep as much as he did.  Marcus was someone who cared about every human being he had contact with.  His weekly sermon notes were so useful, and perhaps because of them, Marcus is so often quoted at our Bible studies.  He had a terrible sense of direction and met many of our neighbours whilst trying to find our houses.  I am sure he had many a good conversation on those journeys.  Marcus was so enthusiastic and hard working.  He loved GO Teams, Holiday Bible Clubs, CY, and local outreach.  He is missed in Donegal so much and thought of with love and respect for his care of us and his devotion to his heavenly Lord and Master.” 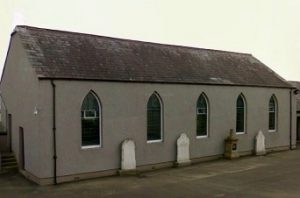 After leaving Donegal Marcus and May were members in Ballyclare congregation for four years.  The Clerk of Session recalls that Marcus made a great contribution to the congregation and is remembered as a self-effacing, gracious man with a servant heart.  He was a great encourager to every one.  In typical fashion he threw himself wholeheartedly into the work of the congregation.  Everyone loved his infectious enthusiasm.  During his time in Ballyclare there were discussions in the Eastern Presbytery about the future of the Larne congregation.  Many members of Presbytery were of a mind to close the congregation down.  Marcus, now 73 years old, offered to be stated supply for a year.  The Clerk of Session, Roy Moore, says, “The people of Larne loved him and respected Marcus and May.  Nobody worked as hard for Larne as Marcus did, producing sermon notes, starting a weekly Christian bookstall in the town market, and revitalising a discouraged people.” In 2007 Marcus and May left Northern Ireland to be with their children in Scotland, but the church families in Ballyclare and Larne felt they had lost family, a mother and a father in the faith who really cared for them.

It was a surprise to May and the family when Marcus announced that he would like to relocate to Glasgow. They did so, settling in Robroyston and spending 4 years in Bishopbriggs Free Church, under Rev Tim Donachie’s ministry. Marcus then returned to his roots by joining the new Reformed Presbyterian church plant established in Glasgow in 2011. During most of this time in Glasgow, Marcus preached in various places as his health permitted.

Marcus epitomized life-long learning: he took a Masters in Philosophy in Glasgow around 1973 and a certificate in advanced education, as well as qualifications in electrical installations, IT, and TEFL (Teaching English as a Foreign Language). He had a keen and developing interest in Egyptology (particularly in understanding and exploring its relevance to the Old Testament) and was involved in a weekly Greek group, the family history society, and the Royal Philosophical Society. He was also involved in supporting refugees who relocated to Glasgow. 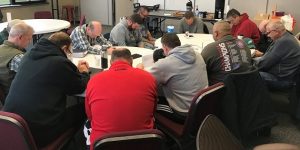 In the life of the church, he enjoyed the interaction of the men’s Bible study group, the Wycliffe prayer group, and the minister’s fraternal. But above all, he was deeply committed to congregational worship of God: However many groups he was involved in or whatever his interests, he was in church both ends of the Lord’s Day and in the prayer meeting through the week. And this required no little effort – when others might have long since given up, his constant attendance on the worship meetings of the church, sometimes hobbling in and out of the building, were both an example and an encouragement for his contemporaries and for a rising generation.

Marcus had a lively and inquiring mind and was an original and independent thinker. He wore his learning lightly and was always gracious when he took a contrary position – which was often the case! His prayers were direct and uncomplicated, often touching issues not thought of by others.

We extend our deepest prayerful sympathy to May as well as to Janet and Paul, and their families, and to Sarah – commending them to the God of all grace and comfort.