Derek Baars  was today elected to serve as associate pastor of Shelter RPC. The Shelter RP Church is located in in Edmonton, Alberta and forms part of the St Lawrence Presbytery of the RPCNA. Shelter is currently the only RP congregation in the state of Alberta. Around 60 people regularly attend the worship services, including many young families with children. There is currently only one ruling elder working alongside Pastor Bob Hackett, so there is plenty of work for another man to do! 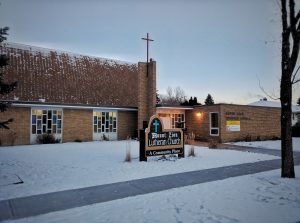 Derek, pictured above with his wife Frances, previously studied at Puritan Reformed Theological Seminary, graduating in 2009. Since then Derek has served as pulpit supply for many Reformed and Presbyterian churches, while being a candidate for ministry in the RPCNA. The date and time of his ordination will be set  on or after April 17 when St. Lawrence Presbytery next meets.