The Pacific Coast Presbytery of the RPCNA met in Phoenix, AZ March 2-3 for her 107th annual Spring meeting. It was a full presbytery meeting, with one of the most notable aspects being the number of men who were examined by Presbytery as part of their on going training for the gospel ministry. We asked Pastor Nathan Eshelman for more details:

“Friday began with a sermon from student Sean Holm (Las Vegas) from Ephesians 2:1-10. Sean did a good job, especially since it was his first time preaching. He was sustained (meaning he passed) in that examination. 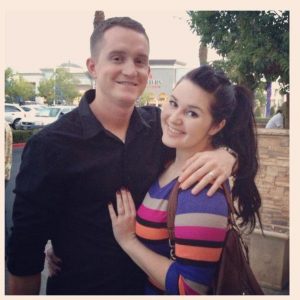 Sean with his wife Geri

Student George Wallace (Phoenix) was excused from his student examinations due to the death of his brother.  Sadly, Mr. Caesar Arevalo (Brea, CA) was removed as a student under care after not meeting certain obligations from the All Saints Brea Session and the Candidates and Credentials Committee.

Mr. Jerry Foltz from the Los Angeles congregation (pictured above) had three student examinations. He was sustained in his English Bible exam, following lunch he preached from Hebrews 6 and presented a very earnest, mature, and balanced sermon. Following his preaching exam he had a first Systematic Theology exam. He did well on that exam and exemplified why knowing your Shorter Catechism is a fine tool in presbytery exams! Heed that word young men.

Saturday morning was used for the ordination exams of Patrick McNeely (pictured below). He did very well on his exams and was unanimously sustained in his personal godliness exam and then sustained in his commitment to the RP Testimony exam following a motion to extend the time of the examination. ” 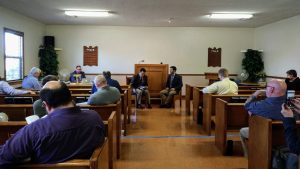 The RP Global Alliance is delighted to hear of so many men training for the ministry in just one Presbytery. Won’t you join us in praying for more men like these, in each Presbytery of our church, all across the world?!