On Friday 19th January Bill Edgar gave a Guest Seminar at the Reformed Theological College, Belfast, on the subject of ‘Calvin and the Arts’.

Bill is Professor of Apologetics at Westminster Theological Seminary in Philadelphia and also a renowned jazz pianist.  Introducing the speaker, David McKay, Professor of Systematic Theology, Ethics and Apologetics at RTC, recalled that in 2015 this event had to be called off at the last minute due to heavy snow.  Just two days earlier the College had again been inaccessible on account of snow, but prayers had been answered and the meeting was able to go ahead! 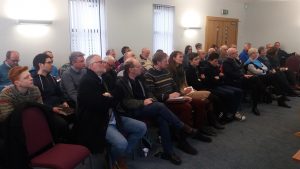 A very encouraging gathering of around 40 people, drawn from a wide variety of denominations, heard a most enlightening and helpful discussion of the relationship of Calvin and the Reformed tradition to the arts.    The common view is that Calvin was an opponent of the arts, and Bill did offer a few quotations from Calvin’s writings that could support such an idea.  He went on to argue convincingly, however, that Calvin’s opposition was directed at the use of artistic representations of God in worship.  In general he valued the arts and was not an enemy of artistic expression.

Bill also dealt helpfully with the issue of iconoclasm – the destruction of religious statues and pictures during the Reformation – and showed that the motivation was often bound up with political issues at the time.  In the early days of the Reformation there was not the luxury of time and opportunity to discuss these questions in a calm, leisurely way.  The positive fruit of biblical thinking on the arts was illustrated with examples from the Dutch Golden Age in painting, when a Reformed worldview was dominant even among those not personally committed to the faith.  Bill’s presentation was greatly appreciated by his audience and a strong case for cultural engagement by the Lord’s people was convincingly made.