On Friday 3rd November 2017, young people from the age of 18 upwards came from the Northern, Eastern, Southern, and Western Presbyteries to Cullybackey RPC for a night of fellowship tailored towards young adults. This event took the form of a seminar hosted by Rev Graeme Hart from McKinnon RPC in Melbourne, Australia. The topic of the seminar was ‘Transgenderism’; an issue that is growing in Australia and is starting to rise here too. We began the evening by singing Psalm 8, acknowledging God’s power in creation and that we are his creatures, being made in his image. Graeme then introduced himself and gave us a short overview of transgenderism before presenting us with the following scenario to consider:

Imagine you are a minister of a church, and at that church, there is a woman called Joan who has been attending services regularly for a number of months, but she always leaves during the final worship with tears in her eyes. After a few months, Joan approaches you and tells you she is willing to do whatever she has to do to be saved. She seems to be aware of her sinful nature and the consequences of her sin if she does not repent. However, Joan hesitates when you ask her if she would like to give her life to Christ there and then. She then reveals that for the past 30 years she has been living as a woman, but before that, her name was John. She underwent gender reassignment surgery at 20 years old and has since identified as female, both physically and socially. She also adopted a child of 8 months, who is now 10 years old. 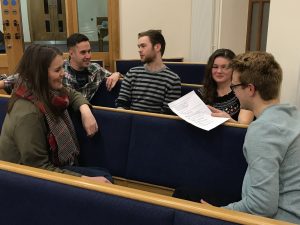 Graeme split us into discussion groups, giving us each an aspect of this scenario to discuss. These included what the Gospel has to say about Joan/John’s sin, his/her repentance and identity, if/how the congregation should be made aware and how they should react, how the men in the congregation should offer support, whether Joan/John should go through reversal treatment and how the child should be told. We then came back and shared our answers with the group, discussing different theories and approaches to each aspect of the scenario. This whole task was extremely useful for highlighting the love that we should show to unbelievers, no matter what their sin is. The very fact that we could look at someone and say their sin is “abnormal” is, in effect, us saying that our sin is normal, which stresses the real need we all have for salvation and repentance. We then closed with Psalm 139 and concluded the evening with an ice cream supper and fellowship.