The Pacific Coast Presbytery met here at the Los Angeles Reformed Presbyterian Church  on October 20, 2017 for a called meeting. Mr. Patrick McNeely, a licentiate from Colorado Springs RPC, preached the opening sermon from Acts 20 called “Sweat, Tears, and Blood” and encouraged the presbytery in her work through these three fluids. Fresno’s pastor-elect, Sam Ketcham, was introduced to the presbytery by Elder Bus Archer. 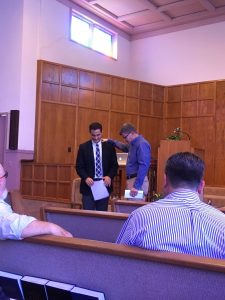 Mr. Ketcham is currently stated supply at Fresno RPC. A letter from a member of the Fresno congregation was read which spoke about how encouraged Fresno church is with Sam’s ministry among them. Mr. Ketcham gave his testimony to the Pacific Coast Presbytery and was then examined on systematic theology and RPCNA distinctives. After being sustained in that exam, Rev. Eshelman read the vows of licensure (vows that all office-bearers take) to Mr. Ketcham which he then signed.

Mr. Ketcham was then presented with the call to pastor Fresno church. Rev. Timothy McCracken (former pastor or Fresno RP) presented the pastoral call. He accepted that call (and will have his ordination examinations on December 15th, here in Los Angeles) before his ordination.