The 500th anniversary of the Martin Luther’s nailing of the Ninety-Five Theses to the door of the Castle Church in Wittenberg affords an opportunity to reflect upon the life, ministry and teaching of the Reformer. We should listen to Martin Luther – not to become experts in reformation history, nor to boast about our spiritual and historical descent from him, but to be mastered and captivated by his God. Luther said ‘I simply taught, preached and wrote God’s Word; I did nothing; the Word did everything.’

Carl Trueman says: “Martin Luther’s significance reaches well beyond the bounds of the church. But for Christians his primary significance is surely that of his theology, his grasp of the gospel, and thus his understanding of the church…It is my pleasure to commend such a fine pastoral collection of essays on Luther.”

This book has been written by members of the faculty of the Reformed Theological College, Belfast and was released at a special commemorative conference held on 31st October in Cullybackey RPC. The book accompanies the conference addresses and includes 3 further contributions to give an accessible way to understand Martin Luther, both the man and his message. 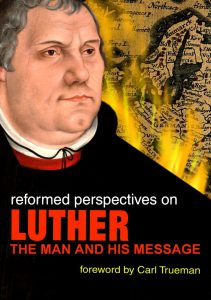 Luther after his conversion, Trevor McCavery

Luther and the Psalter, Norris Wilson

Luther on the original languages of Scripture, Warren Peel

Luther and the centrality of God, Edward Donnelly

Books can be purchased from the Covenanter Bookshop for £6 each, or a congregation can purchase 10 books for the price of £50, if you mention RP Global Alliance when placing your order.