Rich Johnston is retiring from the pastorate of Second (Indianapolis, Ind.) RPC. Yet, like a lot of retirees, he may be moving into a busier phase of life.

Rich was honoured with a church dinner in early July. We enjoyed celebrating Rich’s decades of service that Sabbath. Visitors included RPTS President Jerry O’Neill and Pastor Andrew Quigley of the Scottish RP Church. Andrew identified a key characteristic of Rich’s ministry: his great gift of relationships with people. He has come alongside so many others, many times helping them in doubling, tripling, and even quadrupling their capacities in ways that kept him quietly behind the scenes.

Andrew identified Rich as the role model for co-pastoring, as Rich came alongside Dr. Roy Blackwood first as a deacon, then as a ruling elder, and then as a teaching elder. “It takes tremendous humility to be a co-pastor,” Andrew said. “Rich has led and demonstrated what it means to put others before himself, as it says in Philippians.” 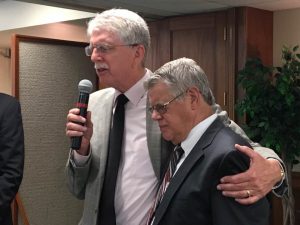 Earlier in his life Rich came to Indianapolis in an attempt to discern how the Lord would fulfill a life calling he found in Isaiah 6:8: “I heard the voice of the Lord saying, ‘Whom shall I send, and who will go for us?’ Then I said, ‘Here am I! Send me.’” He was thinking of overseas mission. But where?

Rich had come to salvation in high school. Running cross country at the championship level in high school was good preparation for him to learn the disciplines from training (2 Tim. 2:3–6) in one of the least glamorous and most painful sporting events.

In Indianapolis he became very active in the church’s mission of reaching people for Christ and in training and building them up in the disciplines and doctrines of Christian faith. Along the way he met and married Beckie, who became an important helpmeet, vital counselor, and best friend. They had two children in the early years, Brad and Kim, with their third child, Stephen, coming along several years later. Rich always had a special heart for young people, both at Second RPC and in the Great Lakes-Gulf Presbytery. With many of the congregation’s children, he was able to carry out Malachi 4:6 and Luke 1:17, turning the hearts of us as fathers to our children and turning the hearts of the children to the fathers.

His titles at church changed over the years: deacon in 1979, ruling elder in 1981, a call to the pastorate in 1991, and ordination and installation in 1993. Though his titles were changing, he never renounced the servant commitment he had made as a deacon and worked in a Mark 10:45 spirit, whether in leading session meetings, visiting members, or leading summer work crews with young people. 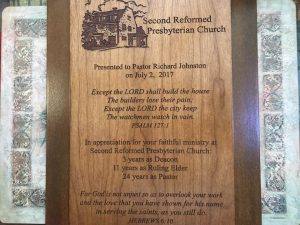 His servant spirit helped other elders grow in their sense of responsibility for the church and her future. He practiced Proverbs 20:5 as moderator of session through drawing out quieter elders: “The purpose in a man’s heart is like deep water, but a man of understanding will draw it out.”

His servant spirit also was a key element in expanding Roy Blackwood’s effectiveness as a pastor. Dr. Blackwood had great ideas and vision. Rich, with the heart of a servant, assisted Roy in putting that vision into practice.

Rich also has been a friend to so many. A Christian brother named Robert Hall wrote a good book titled This Land of Strangers: The Relationship Crisis That Imperils Home, Work, Politics and Faith (2012), which captured a truth that men know in their minds but often miss because we get ambitious for success through projects and career. We often miss the importance of relationships and deep friendships, and the book helps explain why. Rich never needed the book. He has been fighting against this cultural crisis ever since he came to the church as a young man.

He also never lost sight of that original call to be sent. He led Second RPC in expanding the original “Reaching, Training, Building” statement of purpose, to include “Sending.” Often with Rich’s help, many people have been sent from the church into the development of new churches or missions overseas. He has led trips to Scotland and Israel, and in more recent years to India and Liberia. He and Beckie are visiting India this year to see how the Lord’s planting of the church there is going. Following that, there could be travel to Liberia, as the church attempts to discern the Lord’s leading in agricultural missions there. Back home in Indiana are more young people, more work projects, and more senior citizens to visit. So Rich is retiring in theory, but still pursuing a world vision and home missions in practice.

The Lord has His way of answering our prayers and fulfilling our claims on special passages in the Bible. But He does it His way. It could have been fulfilled with Rich being sent to one region of the world for the gospel; but by pouring his life into others, Rich has been allowed to multiply that original vision many times over.

“The heart of man plans his way, but the Lord establishes his steps” (Prov. 16:9).
Russ Pulliam, Elder at Second (Indianapolis, Ind.) RPC,

This biography was originally written for the RP Witness, and is re-printed here with their kind permission.