For six months, from July 2017 through to January 2018, two pastors from opposite ends of the world, are exchanging places.

Rev. Graeme Hart (pictured above with his family) of the McKinnon RPC in Melbourne, Australia and Rev. Robert McCollum of the Newtownards RPC in Northern Ireland have swapped places for six months. Robert and his family have headed Down Under to live, serve, and minister among the McKinnon congregation in Melbourne while Graeme and his family are now in the northern hemisphere and currently at Newtownards, Northern Ireland.

Both congregations, as well as the broader denomination, are benefiting from this exchange. Here are some reflections from both men. 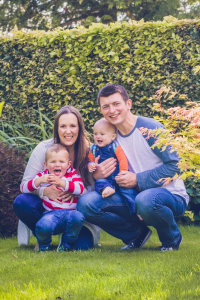 “Since we arrived in Melbourne, Australia, we have had so many wonderful and enriching experiences. We have marvelled at the splendours of God’s creation, from His creatures to His coastlines, and already we have created some unforgettable memories.  However, the main purpose and attraction for coming out to Australia was not kangaroos or koalas (although our 3 year old and 1 year old sons may disagree!). Our main focus while being here is to work with and serve the RP Church of Australia – specifically, McKinnon congregation, in the suburbs of Melbourne.

We quickly observed this part of the world to be extremely diverse and multi-cultural, and the McKinnon congregation is a wonderful snapshot of that diversity. The congregation is made up of people from Australia, China, Peru, Singapore, America, Tasmania, New Zealand, Greece and Northern Ireland! All of which to say – church lunches are certainly interesting! This is a congregation that is in the process of being revitalised, growing from single figures at a morning service 10 years ago, to 30-45 at a morning service today, largely through God blessing Rev. Graeme Hart’s ministry. It has been incredibly refreshing and stimulating to spend time pastoring this group of believers, many of whom are “first-generation Reformed Presbyterians”. It is also a good discipline to preach using basic English!

I’m sure it is difficult to know when to stop using the word “revitalisation” with these types of works. Doubtless there is still some revitalising still to be done, but one thing is sure – there is life and vitality here, and that alone has been well-worth the trip!”

Within our first week in Newtownards our son Lachlan had played three cricket matches for a local club! He was very happy about that. Our children love the Irish accent(s) and I love the narrow roads, the rich Covenanter history, and the lush rolling hills surrounded with thick hedges.

We have been made to feel very welcome and at home. The Newtownards congregation is well-established and much larger than McKinnon. It’s nice having more hands on deck to share the load! Many of the folk have deep roots in RPCI. That said, there are quite a number who don’t have a RP background but have found a spiritual home here.

The month of August was fairly quiet due to school holidays, but since then, the diary has quickly filled up with a flurry of congregational/presbytery/synodical activities. Some past and future events include: the ‘Welcome to Newtownards’ BBQ, congregational weekend at White Park Bay, speaking about the RPCA at various presbytery missionary nights, RPCI ministers’ conference, speaking at various Covenanter Youth events, and a few days up on the North Antrim coast.

But for all those contrasts, they are surprisingly similar: