Covenant Fellowship in Pittsburgh PA is holding a FREE six week class entitled “A Candle Against the Dark: Reformed Presbyterians in the Struggle against Slavery”.

Reformed Presbyterians were among the earliest—and the firmest—foes of slavery and racism in the United States. This course traces the roots of their anti-slavery and anti-racist doctrine, RP relations with other anti-slavery organizations, and notable RP preachers for the Abolitionist cause. These classes explore their role in the Underground Railway and in the agitation leading to the Civil War, as well as the participation of Reformed Presbyterians in the War and its aftermath.

Instructor, Dr. Robert Copeland is a ruling elder at College Hill RP Church in Beaver Falls, and has served the denomination in many capacities since his ordination in 1973. He was the first ruling elder to serve as Moderator of the Synod. Dr. Copeland is Professor Emeritus of Music at Geneva College, and has done extensive research and writing on Reformed Presbyterian history. 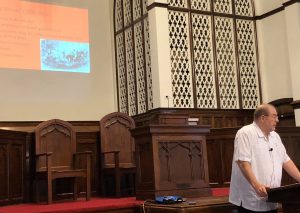 The class, which is held on a Sunday afternoon, has been running since Sept 17th and continues through until Nov. 5th. A lunch is provided beforehand, at 11:30 a.m to which all are welcome. Here’s a flavour of what they have been looking at  so far “Last Sunday in Dr. Copeland’s series we learned that there was some mob violence against several RP ministers because of their anti-slavery stance. Pastor A. M. Milligan from New Alexandria, Pa., was rotten-egged and burned in effigy in Greensburg (only 27 miles from Covenant Fellowship RPC) for preaching against the sin of slavery” says covenant fellowship member Lynne Gordon (quote taken from Facebook).

To find our more information you can email covenantfellowshiprpcna@gmail.com.