On  September 9th, the Atlantic Presbytery of the RPCNA met at the Cambridge, Massachusetts RP church building to install Rev. Noah Bailey as the 17th pastor of the Cambridge congregation since its founding in 1895.  Joining the presbytery were members of the congregation and many friends and visitors from around the northeastern US. 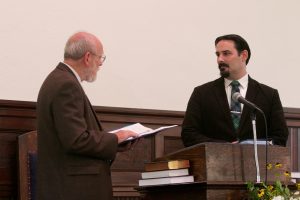 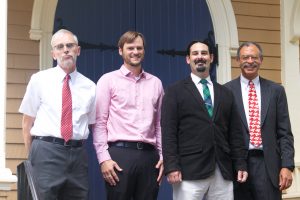 Rev. Alex Tabaka, Moderator of the presbytery, presided in the installation service, and Rev. John D. Edgar preached the Word from Romans 1:1-10.  Charges were given to the pastor and the congregation by Rev. Paul Brace and Rev. Daniel Howe, respectively.  Elder Phillip Shafer, Rev. Bailey’s father-in-law, propounded the Queries for Installation, and Rev. David Coon led in the installation prayer.  Rev. Bailey, who previously served as pastor of the Enid, Oklahoma RP congregation, pronounced the benediction at the end of the service.

Following the service, there was an extended time for lunch and fellowship which was much enjoyed by all.  It was a day of great celebration and thanksgiving for the Lord’s faithfulness to the congregation in hearing its prayers for a faithful pastor to serve among them.