The Reformed Presbyterian Theological Seminary (in cooperation with the Alliance of Confessing Evangelicals) annually hosts the Westminster Conference that kicks off the school year in early September. Given next month’s upcoming 500th anniversary of Luther’s posting of his 95 Theses, our theme this year was on the life of Luther and the legacy he has left. Post Tenebras Lux (“After Darkness, Light”) became a motto of the Protestant Reformation. The conference sought to highlight the transformation that took place as the Lord used Luther’s pioneering efforts.

Held on September 8-9th, the chapel at RPTS was filled with over 140 attendees as Bill VanDoodewaard, Professor of Church History at Puritan Reformed Theological Seminary, with his wife Rebecca joined along with the faculty at RPTS, C. J. Williams, Rick Gamble, Barry York and John Bower to give the talks listed below.The Lord’s Spirit was with us, as he knit the talks together to complement one another, brought new insights to many of us of Luther’s teaching as well as his and Katie’s life together, and gave those attending an eagerness to learn and discuss the material. If you would like to order the audio, please click this link. 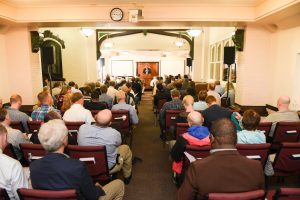 The talks given were:

William VanDoodewaard | If Ever a Monk Got to Heaven by His Monkery: The Life of Martin Luther

Giving a vivid description of the cultural and ecclesiastical landscape in Luther’s day, Bill went on to tell the story of the Lord’s providential work in Luther that took him out of the darkness of Catholicism into true life in Christ.

C J. Williams | Out of Love for the Truth: The 95 Theses and Luther’s Doctrine of Repentance

Focusing our attention on the theme of repentance found in the Wittenberg theses, C.J. explored Luther’s theology of repentance in other writings and explained how the Lord used him as a forerunner like John the Baptist to lead in the reformation of the church.

Rebecca VanDoodewaard | My Dear Katie: The Struggles and Contributions of Luther’s Wife

Rebecca recounted the remarkable life of Katie Luther and how her gifts expressed through her marriage to Luther, home life, and hospitality led toward making the home, rather than the monastery, a center of true Christian ministry.

Richard Gamble | The Very Gate of Paradise to Me: The Development of Protestantism’s Teaching on Justification by Faith

Rick traced the development of the key Reformation doctrine of justification by faith alone in Luther’s teaching, and then showed how it came to full bloom and expression in Luther’s younger contemporary Calvin.

Beginning with Luther’s defense of the gospel at the Diet of Worms, John walked us through the role of conscience in his life and teaching ministry, culminating in the impact that liberty of conscience ended up having on society and on documents such as the Westminster Confession.

Barry York | The Word Did It All: The Bible and the Priesthood of All Believers

Barry showed how early convictions in Luther’s biblically-grounded theology helped him realize the corruptions of the Roman priesthood and how he came to view the rightful place of all of God’s people in the church.

Transcripts of these lectures will be available later in the year on the RPTS Journal, click here to view past conference lectures.