We all looked forward with eager anticipation to our Annual Church Weekend in the beautiful setting of White Park Bay Youth Hostel, North Antrim.  It began on Friday evening 8th September with team games  – which tested our knowledge to the limit! The one in which we were expected to identify the members of Session and Deacon Board from photos of them, when they were children, was quite a challenge!  John McNeill outlined the programme for the remainder of the weekend, the theme of which was – ‘The Global Church’.

On Saturday morning, after breakfast, we welcomed Rev Joel Loughridge and his family. Joel’s first talk concerned the ‘Global Reformed Presbyterian Church’.  Before Joel began he provided us with a ‘Global RPC Quiz’ which helped to demonstrate our limited knowledge of the four recognised Reformed Presbyterian Denominations (i.e. self-supporting national denominations, namely RPCNI, RPCS, RPCA and RPCNA.) However, following Joel’s talk we were much better informed about how the Global Church is growing, especially in South and East Asia.

After a break for coffee, Rev Graeme Hart (our exchange Pastor from McKinnon, Melbourne, Australia) gave his testimony of how he came to know the Lord and how, after graduation and a period in business, he had been guided to train for the Gospel ministry in the Reformed Theological College, Geelong.  He also gave us a brief outline of the situation within the Australian church, especially the need for Elders and Pastors. 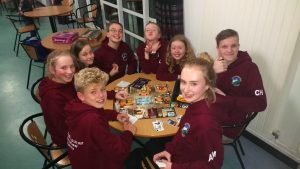 On Saturday afternoon, the younger generation headed for the beach, whilst some of those of more mature years went for a drive to the nearest coffee shop! – ‘The Bothy’, which is owned by the McArthur family (Trinity RPC)

In the evening session, Joel Loughridge spoke about the ‘Persecuted Church’ in which he emphasised the need for us, as Christians, to be better informed about our brother and sisters in Christ in other lands who are being persecuted because of their faith.  Joel encouraged us to be actively involved in keeping ourselves informed through the internet &/or missionary journals about the work of the various Christian organisations who are seeking to provide spiritual and practical support for those who are in desperate need throughout the world. We can do this by praying and giving.  Before supper Joel McCavery led a ‘Psalm Singing Session’ and conducted devotions.

After breakfast on Sunday morning, Mark McCavery gave us an illustrated talk about the school year that he Beulah and Anna spent in Cyprus.  They lived in Larnaca where they were welcomed by the small group of members in the RP church there.  Mark spent the year teaching at Logos English school, where all the teachers are Christians so there were plenty of opportunities to read the Bible, speak about Christianity and for personal witnessing.  Although quite challenging, especially at the beginning, as a family they had benefited greatly from the experience. 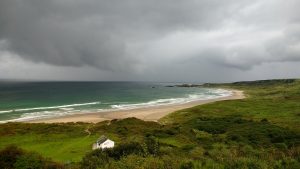 After Sunday lunch, John McEwen expressed appreciation to the Organising Committee (including Rev Robert McCollum!) and all those who had willingly helped leading up to and during the Church Weekend.  James Kerr then concluded our Church Weekend with prayer.