On Dean Martin Drive in Las Vegas, Nevada, forty-seven people gathered for worship in the back room of a rented church building. From the perspective of the world’s desert-playground, the called service of public worship was less than noteworthy. It went totally unnoticed, I am sure. The night before this worship service McGregor and Mayweather boxed at MGM on “the strip” while millions watched over pay-per-view. Over that same weekend dozens of famous music acts, comedians, dancers, and less honorable shows and events occurred. Millions of dollars—or more—were spent at tables and in slot machines. But which event had eternal significance? Las Vegas Reformed Presbyterian Church was established.

In 2012, a group of friends committed to confessional presbyterianism approached the RPCNA’s Pacific Coast Presbytery with a Macedonian call: “Brothers, come over and help us!” Since that time the small Pacific Coast Presbytery sent ministers and prayers, gave oversight and counsel, as well as loved, taught, and encouraged this small group of friends and worshipers. Over time the small group grew to include several new families and singles.

Not all were happy. “Your church is doomed before it even begins.” That was the comment of one local who encouraged one of the worshipers to close up shop—don’t waste your time planting a church like that. A confessionally reformed church will never flourish in this city—especially with a cappella psalm singing! Another person commented that the “RPCNA’s money” should not go to help out in such a city as Las Vegas. Why would we plant a church there? It is so sinful. It is so unsafe. I’ve heard that with my own ears.

The Lord is faithful. The desert rose will blossom.

After five years of proverbial blood, sweat, and tears, the Las Vegas Reformed Presbyterian Church was established. It did not draw the attention as that of the Mayweather victory or the wows and amazement of Cirque du Soleil; but there is eternal significance. Out of the desert blossomed an outpost of Jesus Christ—an outpost from where the gospel will go forth. The lives of broken people will be healed. Sinners will become saints. The crooked will be made straight. An oasis has formed in the midst of a spiritual desert (The metro-population of Las Vegas is just shy of 2 million souls—and those two million souls are served by four NAPARC congregations. Four! A spiritual desert indeed.). The prophet Isaiah reminds us that under the gospel administration, “The wilderness and the solitary place shall be glad… and the desert shall rejoice, and blossom as the rose.”

The presbytery oversaw the new members covenanting together to “live together in brotherly unity as an organized congregation… being obedient to the courts that are over them in the Lord, and that by a godly life they will seek to promote the purity, peace, and prosperity of the church as a whole.” The members then signed the covenant and proceeded to call their first minister. 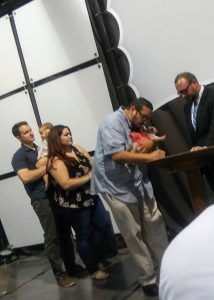 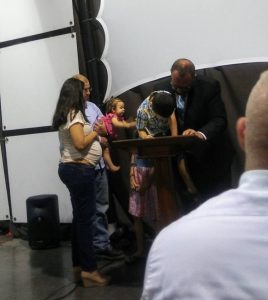 The gospel call was unanimous. The desert rose will blossom. 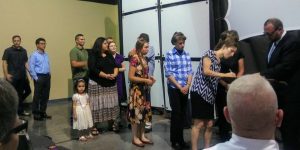 Sometimes I am accused of being overly-optimistic. That’s okay. My optimism is not in my presbytery’s abilities or the abilities of the minister that the newly formed congregation called—but my optimism is in the promises of the gospel and the work of the Lord Jesus Christ—confident that even desert places will flourish under the preaching of the Word. Will you join me in both rejoicing and praying as this new congregation seeks to serve Jesus Christ in what the world calls “Sin City?”

Will you pray for the minister that they called as he contemplates this Macedonian call? Will you pray that from this desert place the gospel would go forth in power and might unto the glory of Jesus Christ. May she continue to blossom under the preaching of the Word.

Nathan Eshelman, Pastor of Los Angeles RPC [This article originally appeared on Gentle Reformation and is used by permission] 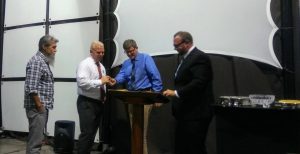