This summer was an exciting one for Gateway Christian Fellowship that meets in Derry City, as they hosted their first ever GO Team. The team consisted of 10 members, 5 from other congregations and 5 from Gateway. On the evening of Monday the 14th we began to study our two books for the week, the first was Tactics by Gregory Koukl which we used to prepare us for door to door work, and the second book was Nothing in my hand I bring by Ray Galea which equipped us to speak on the Roman Catholicism that is prominent within Derry. We closed the evening praying that God would be pleased to work through the team to spread the truth of his word in Derry.

Each morning began with devotions lead by a different team member which was to prepare us for the day of work ahead and typically after lunch we joined in a study focused on our two books.

Tuesday morning and afternoon consisted of door to door work as we used a questionnaire to spark discussions on door steps. We encountered many people with various beliefs and our prayer was that by such encounters we could at least ‘put a stone in their shoe’ (as Gregory Koukl puts it) by giving them something to think about. During door to door we also handed out invites to our public meeting on Friday called ‘Hope when all seems hopeless’, as well as leaflets produced by the congregation that hoped to tackle common questions encountered by Christians. 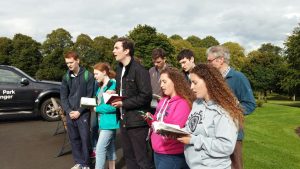 On Tuesday evening we also carried out our first session of street ministry which was a first for the Gateway congregation. We started with public psalm singing as we sang psalms 117, 112 and 23 and following this I (Matthew Magee) gave my testimony and Stephen Neilly closed with a short message focusing on the two robbers on either side of Jesus during his crucifixion. Some people stopped and several others walked by and we pray that God would use whatever they may of heard to stir an interest in their hearts. 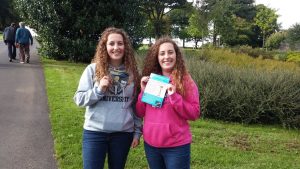 Wednesday morning featured a large number of invites and leaflets being distributed around several neighbourhoods throughout the city followed by more door to door in the afternoon. Our second session of street ministry occurred on Thursday morning and we moved to a much more populated area in the city. Many more people heard and saw us and whilst we sang or spoke we were able to hand out many invites and some conversations resulted from this. Thursday afternoon featured more leaflet distribution and in the evening we met for a dinner with the whole congregation and we enjoyed friendship and fellowship with one another.

Friday morning was our last door to door session and we were thankful that generally we were well received on the doors with very few bad encounters and through it we established many contacts for Gateway to follow up on in the future. The team set up a Pop-up cafe in a cottage in the city’s craft village for Friday afternoon and many people visited and enjoyed refreshments whilst listening to live music provided by the team. Free Christian literature was available and a lot of visitors left with some literature and we pray that they would read it and that God would work through such things. Our public talk ‘Hope when all seems hopeless’ was led by Vincent McDonnell and was well attended and we’re thankful for 6 new faces that attended and we pray that the talk would feed their interest in finding out more about the gospel. The week rounded off with a team breakfast on Saturday morning. Our final hope and prayer for the week was that God would’ve been at work through us as we alone can achieve nothing and that his truth and gospel would’ve been planted in the city. 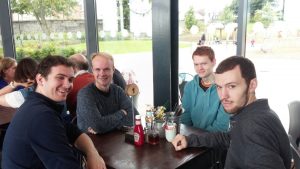 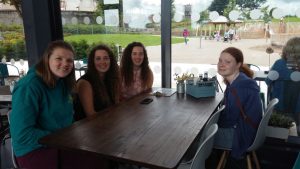 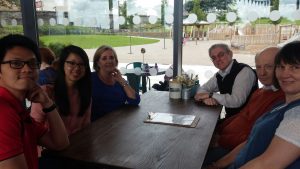