Galway GO Team took place this year from the 15th to the 22nd of July; the team comprised of Stephen Fallows, Peter Davis, Nathanael McCollum, Sarah Bleakly, Jessica Quigg, and Anna Coulter. We also had the help of Thomas & Rachel Jemphrey, and Michael & Patrick Hamilton who are part of the church: Covenant Christian Fellowship. Most of our team time took place in the church building, where we began with devotions on Saturday evening. On Sabbath we joined the fellowship for their morning service and church lunch which followed – this was a great opportunity to get to chat to those in the fellowship and get to know the congregation better. Afterwards, we were shown through the streets of Galway by the young people of the fellowship, and then enjoyed the beauty of God’s creation as we sat in the glorious sunshine throughout the afternoon. We then divided for dinner, as we did each night, between the Hamilton and the Jemphrey homes. Evening service in Galway takes the form of Bible study, as it did on Sabbath also. We looked and discussed the Reformation, which was an introduction to the Bible studies we would have during the rest of the week, delving into a different ‘sola’ each morning. 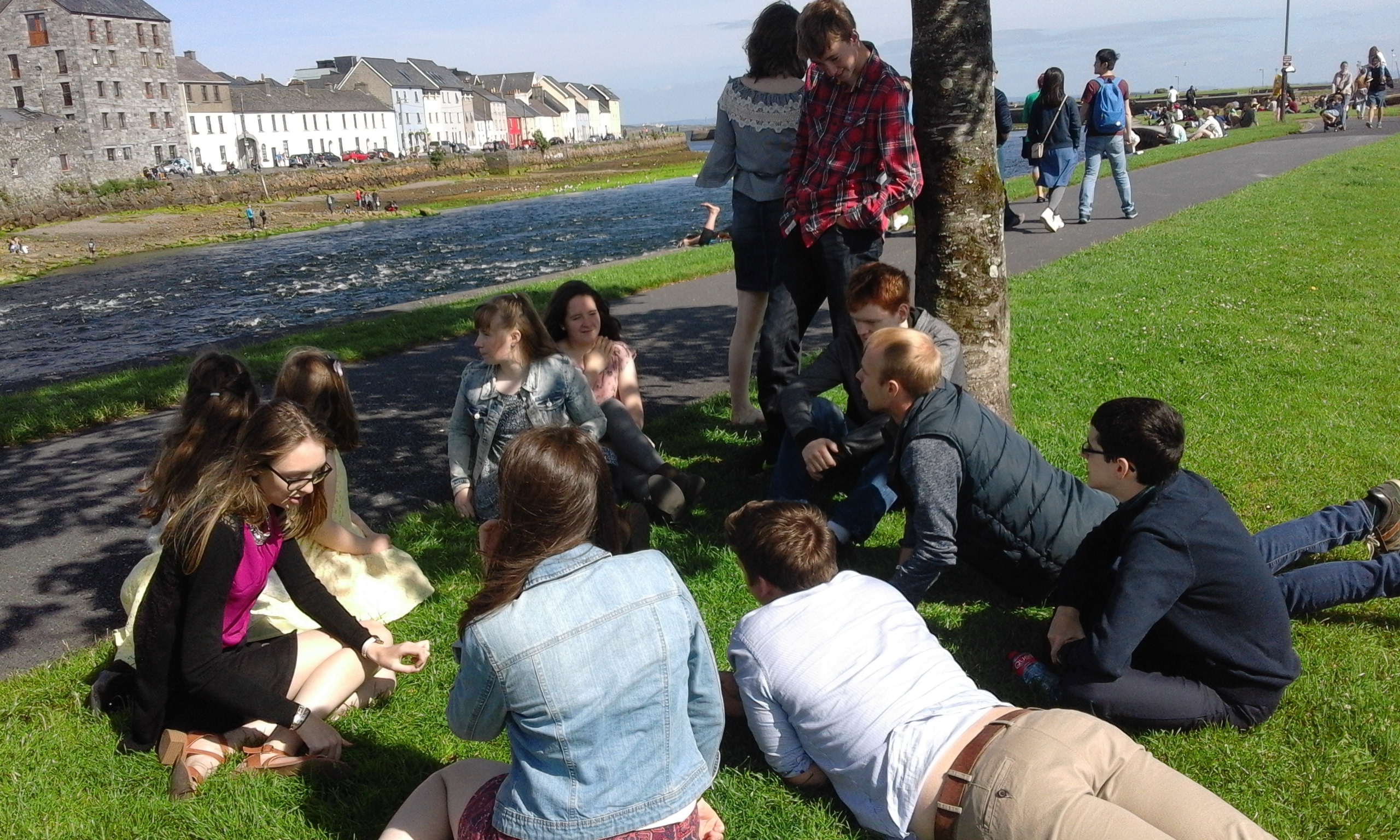 Each morning began with Bible study at 9:30, and then after 11:00 we distributed ‘4you’ magazines throughout the city in the different estates along with an invitation to the public meeting on Friday. Monday and Tuesday afternoon we continued to do distribution. Also in the afternoons, different members of the team got to staff the bookshop, and so on Monday Michael and I did this. This was encouraging to experience, to see how the bookshop is a form of ministry also. It is located just off Shop Street in Galway, and many different people ‘float in and out’ of the bookshop, some just to have conversations with those staffing the shop; e.g. a Jehovah’s Witness who has had many beneficial conversations with Billy previously, arrived and had a lengthy discussion with us.

Monday evening began our work of street evangelism. This comprised of Peter, Billy, and Stephen Fallows doing open air talks to proclaim the Gospel. As a team we were ‘the audience’, standing and listening to encourage people passing by to stop and listen. Some would only listen for a minute or so, others would stay until the end. Even for those who stop only for a moment we can take encouragement that what they heard God can use in their hearts for the growth of his kingdom. For any who lingered after the talk was complete, we sought to begin conversation with and also we provided free literature and leaflets to those who were interested. Likewise on Tuesday and Wednesday evening we maintained the same activity, and we can give thanks to God for those with whom we had conversations no matter how long or short they were, and also for the lengthy discussions Billy and Peter had with some listeners; furthermore give thanks for one man who purposely appeared to hear the evangelism and with whom Peter had discussion each night.

Wednesday afternoon comprised of a well-earned break; as a team we were free to do as we chose which resulted in great enjoyment through a nerf battle, before a pizza tea. Following we headed back out to Shop Street to continue with street evangelism. Thursday afternoon we divided between different evangelism in the city. A few of the team manned a book table which contained free literature and leaflets covering a wide variety of topics. This led to opportunities to speak with many different people, even with an atheist who came back to discuss with them a little about Christianity and why he chose atheism – he also took away with him a leaflet which challenged atheism. A few others staffed the book shop, while the rest of us went in pairs to do a questionnaire to instigate discussion about God, Christ, and the afterlife. This opened up many opportunities and gave us insight to the variety of things that people believe, and also to people’s belief in Catholicism to which many people in Ireland are committed. Between Eyre Square, Spanish Arch, and the University Campus, many profitable discussions were had. 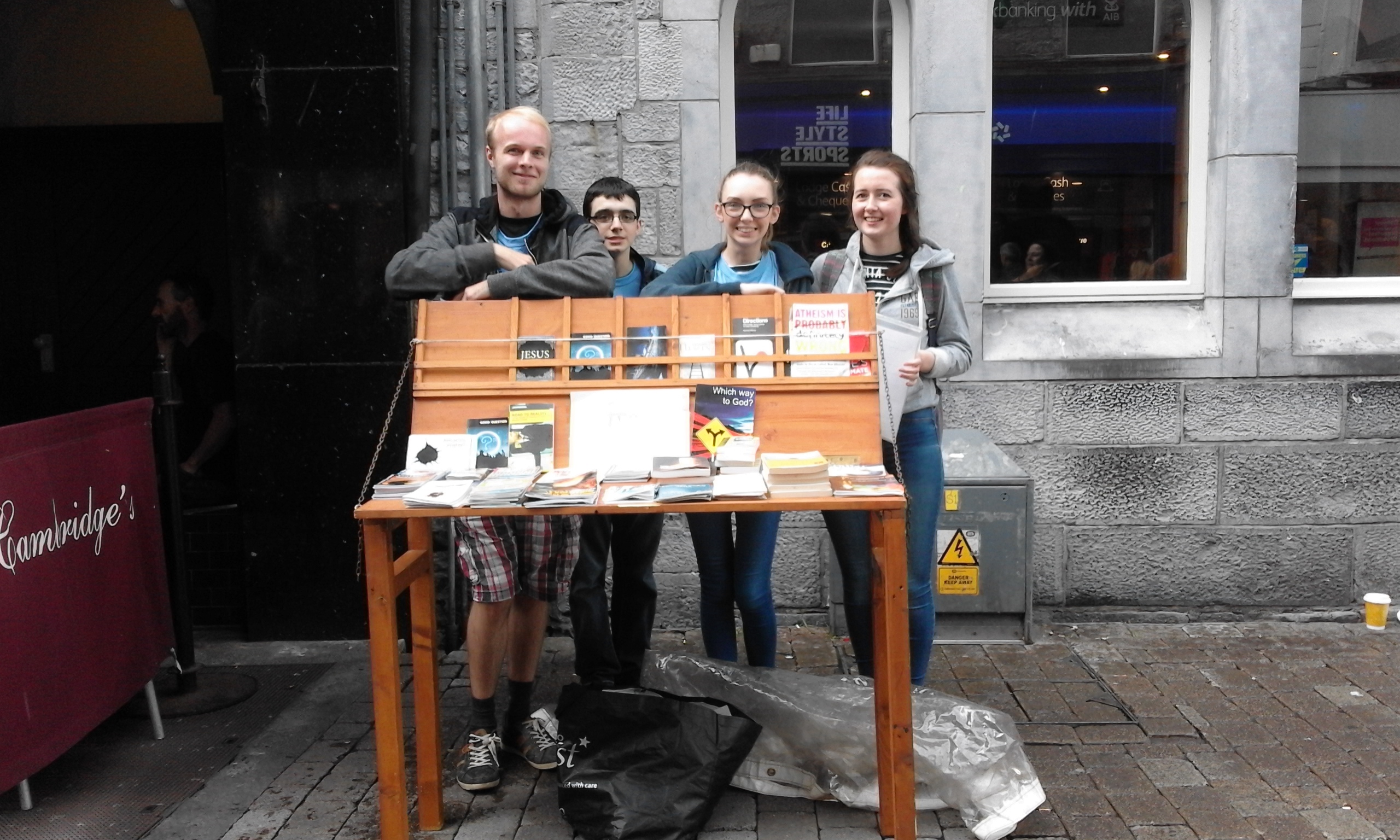 Thursday evening was the first of two public events. Martin and Mary Crossin from Milford, Donegal, played music and shared their story of how they came to faith in Jesus Christ and how their faith affected their view of their God given talent of playing music. Give thanks for neighbours and friends who had been personally invited by those in the congregation and came along hearing Martin and Mary’s witness, and pray that God will use this to work in their lives for the furtherance of his kingdom. 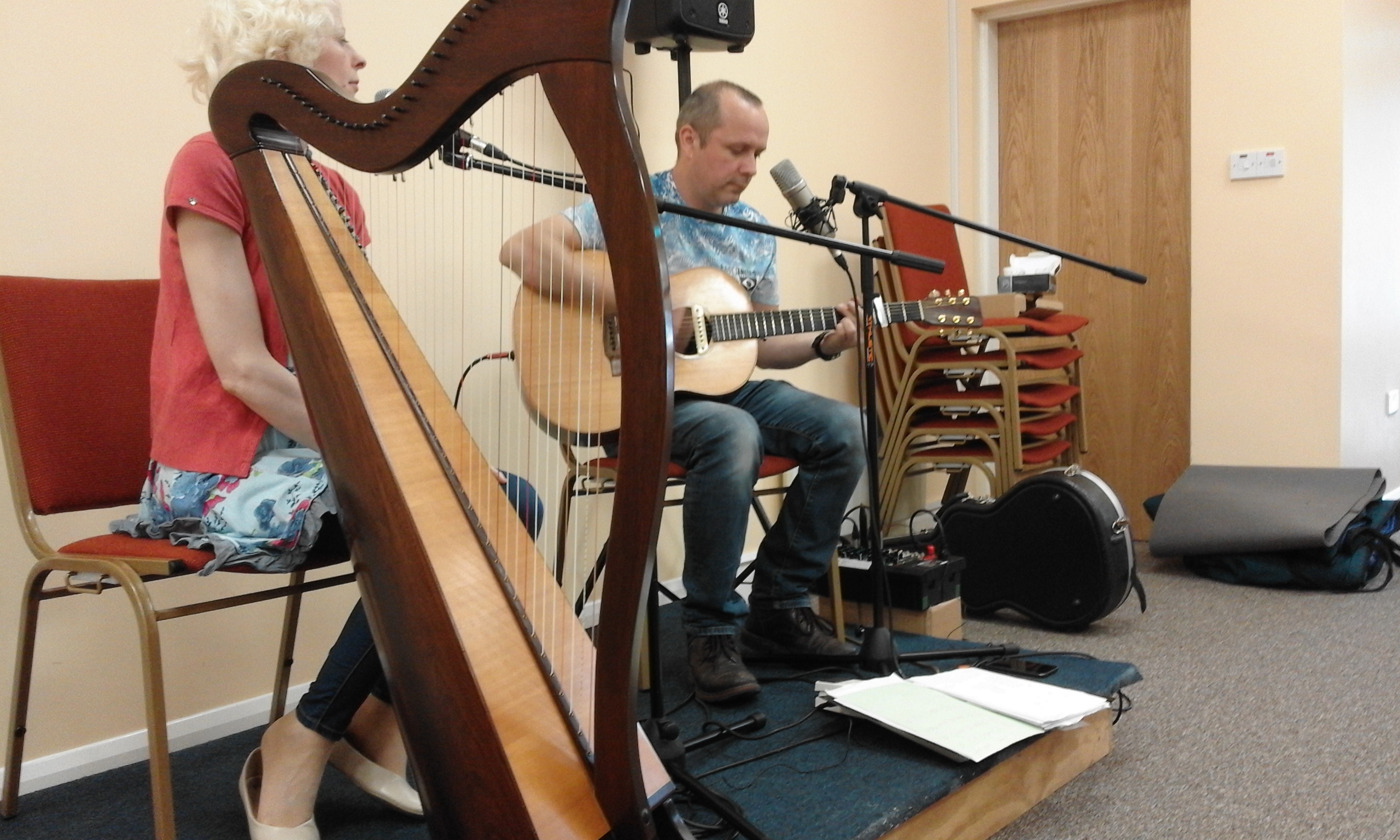 Friday afternoon followed a similar format to that of other days, with team members in the bookshop and distribution also. Friday evening was the public meeting to which we had been distributing invites. Galway (and the West of Ireland) is heavily affected by depression, and so Dr Noel McCune spoke about depression and also included the gospel throughout the talk as well. Numbers may have been small (about 30 including those from the fellowship) but we can give thanks for those who came as they appeared to be those struggling with depression, and many took literature which would expand on the topic further.

It was really encouraging to be on the team and to see the work that the church is involved in, and to be able to help and encourage the church in the work we did last week. Give thanks for opportunities we had throughout the week to spread the Gospel, and pray that God would continue to work in the lives we touched. As we learned in one of the Bible studies, we can bring it as far as people’s ears, it is God alone that brings it into their hearts- pray that this would happen, and that salvation may spread throughout the city.

August 1, 2017 at 5:00 am Admin Covenant-Christian-Fellowship-Galway-RPC Latest News, Slider Share via: