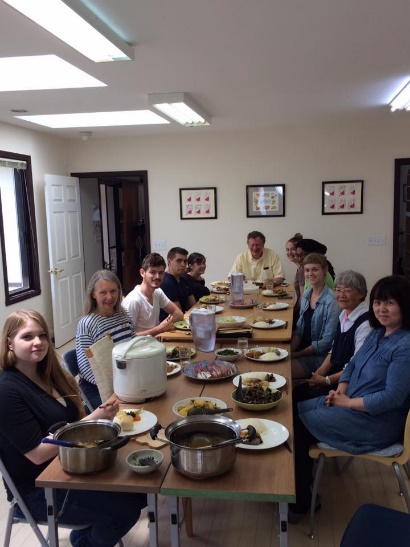 From June 14th to June 7th I had the privilege to serve with a team of five in Yomamoto-cho and Sendai, Japan.  Myself, Laura Trokiemenko, Melannie Fields, and Benjamin Goerner lived in the Nozomi Center in Yomomoto-cho for three weeks along with Seth Felker, the mission intern.  For the first week and a half we helped with the relief center as they carried on with normal activities including cafes, English lessons, cooking classes, and passing out fliers and calendars to the area. We also spent time weed whacking, painting roofs, and uprooting bamboo. The area in which we worked was, 6 years ago, hit with an earthquake, a tsunami, and a nuclear plant failure. Due to the culture, the Japanese people really can’t talk about the horrors of the tsunami and so it has been a very slow healing process. Many come to the center because it’s one place they feel comfortable to talk and every single person we spoke to wanted to tell us about their personal experience. We met people who had their whole homes swept away and temporary homes are still being used. We were also able to set up an English cafe where we were able to share testimonies, stories of our homes, and some of our skills. Laura, who is half British and half Ukranian gave a Ukranian cooking class which was followed by Seth giving a Bible lesson. We were blessed to have very good attendance for that. In the second half of our trip we traveled an hour to the Megumi Church in Sendai. Pastor Uomoto put us to work passing out fliers, installing insulation and building floors. In our free time Murry would teach us about Japanese history, a bit about the churches here, and a bit of the language. Lastly, we were able to go to an OMF prayer meeting. It was such a blessing to be able to meet several missionaries from all around the Sendai area and learn how best we can be praying for the churches of Japan.