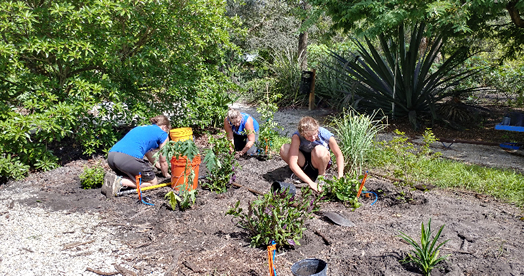 On June 28, twelve participants returned from a sixteen-day RP short-term missions trip.  The participants represented eight RP congregations from Indiana and Pennsylvania.  The purpose of the trip was to assist ECHO (Educational Concerns for Hunger Org.) in their work to find and develop agricultural strategies for use in underdeveloped countries throughout the world.

The team did agricultural work on ECHO’s research farm near Ft. Myers, FL.  One of the research projects that some of the team worked on was the development of a chicken plucker that was powered by a bicycle rider.  Another important project involving many team members was the construction of two rice paddies that will be used to demonstrate different cultivation techniques for growing rice.

The ECHO staff made special effort to provide training and resources that will be passed on and utilized by the RP missions work in South Sudan.

An unexpected ministry for this year’s team was accepting a United Reformed Church pastor’s request to help his congregation learn to sing Psalms acappella from the RP Psalter.  During the evenings the team read and discussed Everyone’s a Theologian by R.C. Sproul.