From Monday 12th June the Synod of the Irish Church met in the historic situation of Ballylane Covenanter meetinghouse in beautiful South Armagh. Ballylane, along with the congregation of Ballenon, hosted Synod over the next two days. 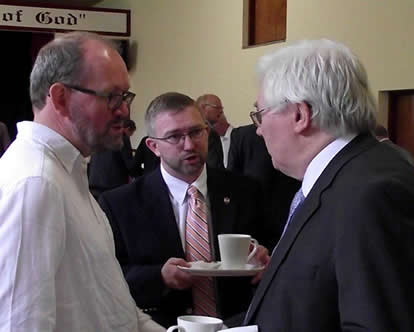 Tuesday was the main day of business and relationships were considered with other denominations. The Mission Committee gave thanks for the last 50 years of established missionary work in Galway, along with reports on the work in Nantes. Sabbath School material is being redesigned and a new Psalm app for mobile devices is available.

Delegates were received in the evening from The Evangelical Church of England and Wales, The Free Church of Scotland (Continuing), the Rev Kenneth Stewart spoke on behalf of the R.P.C.S., and Rev David Whitla for the R.P.C.N.A.

Wednesday morning was set aside for prayer following the challenging address by Rev Kenneth Stewart of the sanctification of the minister.

Further reports were received regarding the Theological College and the Reformed Witness Committee among others. Synod decided to begin the revision of the Testimony to reflect theological and ethical issues that have arisen since the last revision in 1990. The update of Global Alliance was well received, and Synod was exhorted to support its vision.

The evening Missionary rally focused on the work of evangelism in the Republic of Ireland and was attended by a large number.

We thank God for His presence with us at Synod and look forward to the next year in the service of Christ the King.