At the RPCI Synod in 2016 James and Eileen Anderson told us of how significant persistence and perseverance had been right from the start.  In that regard the key elements of mission have not changed much.  This year, at Synod, we heard something of how God worked in the following thirty years.

In an evening if two halves, we heard first from Raymond Blair, Billy Hamilton, Mary Hamilton, Patrick Hamilton, and Thomas Jemphrey.  Their responses to questions put to them included:

Raymond, who took over leadership of the team in difficult circumstances after the sudden death of Trevor McCauley, told us, how, with God’s help and the support of Billy Hamilton, Christian friends, and the Irish Section of the Mission Committee they got through those dark days, about which one member of the Fellowship said “It’s hard but not too hard”;

In telling us of the various types of ministry Billy had been involved in, he included the challenge of leading gospel-focused, evangelistic Bible studies in their home and of the encouragement which came when one participant exclaimed “I get it” with reference to the substitutionary work of Christ;

Mary, who had already spoken at the ladies’ event in the afternoon, shared some highlights from her time in Galway.  She referred to the English Bible Class for international students.  She quoted from one of her attendees, “I think of you when I have a Bible study in my church and how you helped me walk in the truth.”

Thomas, the youngest member of our panel, told us of how God provided for him through local football and tennis clubs as well as getting a place in a much sought after Secondary School, St Enda’s.  He also voiced appreciation for church camps and the friends he has in the north of the island.

Although being at least 3 hours away from the nearest RP church we did not have a sense of isolation.  We appreciated those who made the effort to come down to see us.  However sometimes when folk from Galway come to denominational events they can feel left out.  That’s something to bear in mind – the need to be thoughtful and careful about what we talk about.

In seeking to help the congregation understand what it was like being the only Christian in his year group, Patrick Hamilton responded. “It’s not really a bad thing as you have the opportunity to fulfill Jesus ‘command to be salt and light in the world. It has been an amazing experience to know how God has provided for me in school”.

In closing, as the second longest serving RP missionary still in active service, Billy referred first to Shirley McCauley who, with a real servant’s heart, integrated into her local society and communicated the gospel.   Billy then referred to Trevor McCauley, a servant and visionary who thought carefully about how to have an IRISH church.  Billy then challenged the whole congregation to consider working in the Republic of Ireland.  Finally, Billy challenged the whole gathering to serve Christ regardless of how dysfunctional their lives may seem.

Part two of the evening was an address by Pastor Matthew Brennan (Clonmel Baptist Church).

In his introduction Pastor Brennan set the scene by referring to 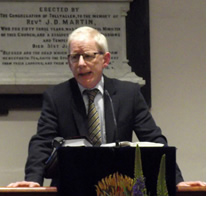 The Man in the Arena

“The credit belongs to the man who is actually in the arena, whose face is marred by dust and sweat and blood; who strives valiantly; who errs, who comes short again and again, because there is no effort without error and shortcoming; but who does actually strive to do the deeds; who knows great enthusiasms, the great devotions; who spends himself in a worthy cause; who at the best knows in the end the triumph of high achievement, and who at the worst, if he fails, at least fails while daring greatly, so that his place shall never be with those cold and timid souls who neither know victory nor defeat.” (Theodore Roosevelt, Paris, 23 April 1910)

Referring to the Apostle Paul as a pioneer, as found in Acts 18 1- 11, Pastor Brennan illustrated five things from the passage: –

Referring to dark days for the gospel in Ireland, Pastor Brennan quoted Leonidas, to whom a warrior said:

“Because of the arrows of the barbarians it is impossible to see the sun,” to which Leonidas replied, “Then we’ll fight them in the shade”