On Thursday some of us went to hear Prof. David Galloway (President of the Royal College of Physicians & Surgeons) speak at Glasgow RP Church on ‘The Universe: Random or Designed’? Around 100 people were present for what is planned to be the first of 3 public meetings on the issues of Creation and Evolution. As well as local visitors, a good number were present from the RP churches in Airdrie and North Edinburgh. As part of Prof. Galloway’s talk, he showed the following video which shows the astonishing fine tuning needed for life to exist:

As well as highlighting some of the incredible design of the universe, Prof. Galloway also talked about a number of areas where Darwinism is increasingly being questioned today.

After the talk there was a time of Q&A, and then supper was provided. Overall it was a very worthwhile evening, and a great introduction to a vitally important topic. 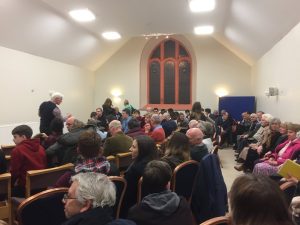